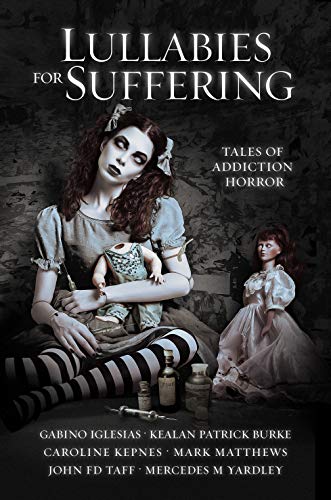 Addiction starts like a sweet lullaby sung by a trusted loved one. It washes away the pains of the day and wraps you in the warmness of the womb where nothing hurts and every dream is possible. Yet soon enough, this warm state of bliss becomes a cold shiver, the ecstasy and dreams become nightmares, yet we can’t stop listening to the lullaby. We crave to hear the siren song as it rips us apart.

Six stories: three novellas, three novelettes, written by a powerful list of talent, all featuring the insidious nature of addiction–damaged humans craving for highs and wholeness but finding something more tragic and horrific on the other side.

First of all, I’m going to admit that I absolutely LOVE how hauntingly beautiful the cover is. I would’ve noticed this anthology for the cover alone. Secondly, I’m a huge fan of the TV Series YOU, so knowing that Caroline Kepnes contributed to the anthology gave me the extra push I needed to pick it up.

All the stories in this anthology center around addition (something they’re drug-related other times it’s the addiction to something else that’s just as decremental to your health and turns you a slave). Most of the stories written for the anthology aren’t truly short stories but verge on the novella length, which I didn’t mind at all. With any anthology, there were some gems and some misses for me. Unfortunately, the anthology started off truly strong with “Sometimes They See Me,” by Kealan Patrick Burke, which is a tale about two addict and their crazy benders. There’s something truly haunting about it and one that will leave you questioning any painting or wallpaper you ever see again.

“Monsters” by Caroline Krepnes follows the same writing style as YOU (writing in the second person) at least when the story is narrated by a lonely young man who is accused of a crime he didn’t commit. I really enjoyed the story, but despite the narrator having been wronged, I still feel like he had very much Joe-vibes going on.

My absolute favourite story from the whole anthology was “Lizard” by Mark Matthews. It had everything I looked for in a horror addiction story. It showed the horrors of true addiction but it also had supernatural elements to it that I enjoyed very much. Also, it ends in a very ambiguous way ala “The Lady or the Tiger” where you’re left questioning what decision did the protagonist makes after all?

“The Melting Point of Meat” by John FD Taff started off very strong for me, but kind of took a Clive Barker turn towards the end that I wasn’t a fan of. I would’ve enjoyed this story better if it had another ending.

After that story, the anthology started going downhill for me. I didn’t particularly enjoy “Beyond the Reef” Gabino Iglesias nor “Love is a Crematorium” by Mercedes M. Yardley. I know that addiction usually ends with the addict’s death, however, Yardley’s story was more real-life horror than anything else. It was truly gut-wrenching but I suppose I was still waiting for horror (as in psychological, supernatural, or slasher) to happen. And I had a HUGE issue with the male protagonist Kelly, whom we’re supposed to see as some kind of Romeo, but honestly, he seemed perfectly OKAY allowing Joy (the girl he loved) to prostitute herself for food money. I don’t understand why he never tried to resolve their lack of cash problem or actually be of help rather than just be there but not really doing anything for Joy. I wouldn’t have run away with this dude, he really provided no resource at all, not even emotional support.

I recommend this anthology if you’re into tales of addiction with a dash of darkness.