Glossier is the kind of brand that has gathered devotees like a cult. When I did my first Glossier haul, I was impressed with their products but couldn’t quite understand the cult-like devotion. Fast forward to me purchasing a second Glossier haul, and soon after going for my third haul. In this post, I’ll be sharing products from both my second and third hauls (the only thing I didn’t include was Brow Boy, which I repurchased but already reviewed during my first Glossier haul).

Maybe it’s the fact that I’ve grown weary of seeing beat faces on my Instagram with exaggerated makeup as though we need to recreate a whole new face every morning. Being a makeup lover, I’ve always adored that aspect of makeup being used as a way of transformation, but I also do enjoy it as a means to enhance your own natural beauty. Which is where Glossier comes in. Their brand motto is, “Skin first, makeup second,” and I can get behind that sentiment.

Every since NYX discontinued their eyebrow marker, I’ve had to settle for sub-par semi-marker brow products from Revlon in the meantime, so of course, when I saw this product launching I simply had to get it! I know some beauty gurus out there are saying that the product is too sheer, however, I didn’t think that was the case for me at all. I got the shade Brown (to be paired with my Boy brow in Brown) and have never finished my eyebrows in such a short amount of time (two minutes!). Using only two products! (Brow Flick and Boy Brow) Before, I was using a total of SIX eyebrow products (and spending 10 minutes on each brow!), but the microfine tip on this maker makes it so easy to mimic hair strokes (something that I could never achieve with other markers or pencils before and sucked it up to just being a terrible artist, but turns out that I was just using terrible products!). And the sheer colour makes it so it doesn’t look too harsh. In other words, this product is my new ride or die and I BEG Glossier to never discontinue it cause I wouldn’t know what to do without it.

I read so many reviews about (some people loved it others were outraged that they spent so much money on a product with very little colour pay off). Now, I’ve been using liquid lipsticks for the past three years and despite the fact that I DO love them, I have grown a little tired of their too makeup look and have been craving for something a little more natural. This lipstick is meant to be sheer and look blotted, so since my lips are naturally super pale, I went for the shade, Zip, a poppy red. Apart from the colour being really flattering on me, what I really loved most of all was the formula. It’s sheer but matte. It’s also moisturizing but not creamy, meaning that it actually is long lasting and doesn’t bleed (one of my bigger pet peeves). I definitely see myself wearing this for the summer months when having heavily lacquered lips may not feel the best when you’re trying to combat the heat and just want to be lazy (but still look pretty too!).

Feeling nostalgic for my teenage makeup days, I decided to select the shade Lily (it’s a sheer lavender hue). Now if you’re one of those people that want uber pigmented eyeshadows, then steer clear of the Lidstars, cause like with anything else from Glossier, sheer is the name of the game. The colour itself is very pretty, but I don’t know if I have personally outgrown the lavender eye look, but I wasn’t too crazy about it. However, I did love the formula and do want to try their other shades (especially Cub and Fawn) that seem more like the shades adult me has worn for the past decade. Maybe there’s a reason why we outgrow beauty looks, because they’re no longer a reflection of ourselves. 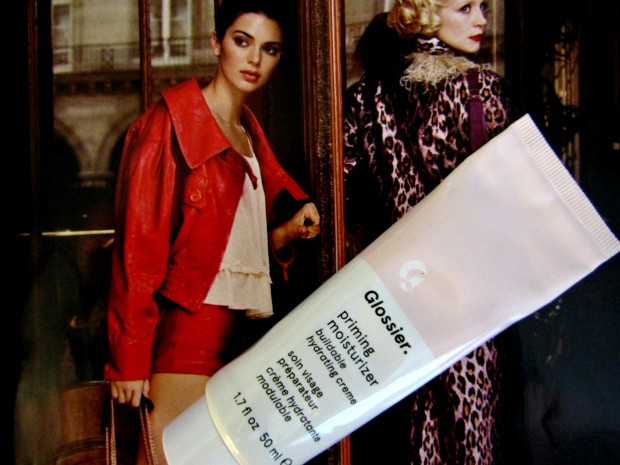 Since I don’t wear foundation, I only use primer around my eye area to keep it hydrated before I apply concealer. But I was curious about how my skin would look with their primer since it’s advertised to give a healthy glow. I’ve always been a fan of dewy skin, however, having oily skin means that I can’t really use products meant to enhance dewiness as it just turns into an ugly oil spill on my face. But I don’t know what kind of sorcery they’ve concocted when they made this primer, but this delivers a healthy glow without the extra oiliness. And it does keep the skin hydrated the whole day. And if you’re wondering how much you need to use, a dime size is enough to use on your whole face (maybe two if you’re on the dry side).

After three Glossier hauls, I can totally understand the cult-like following. If you’re someone who simply wants to enhance your own features with a “woke up this way,” vibe to it, then Glossier is your go-to brand for this. And honestly, we could all use a break from having a beat face, cause laziness has never looked so pretty before.