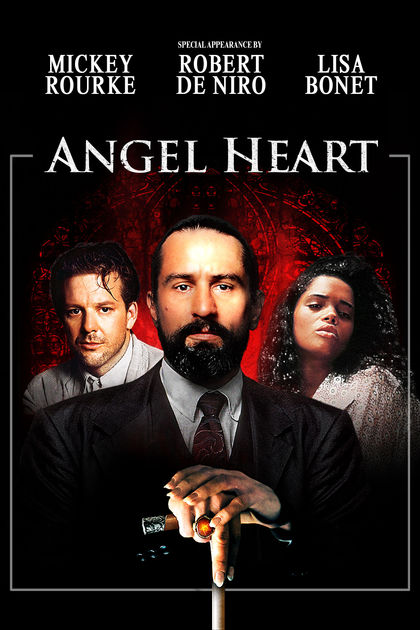 I’ve decided to start a new series, Throwback Thursday. So one Thursday a month I’m going to share my experience of either rewatching, rereading, or relistening something that I adored back when I was a youngster (think between the ages of 6-18) and see if it stands the test of time. So for my first Throwback, I decided to rewatch the 1987 horror film, Angel Heart.

When I told a friend of mine that I saw this movie at six he was appalled (what can I say? My parents were horror fans who knew I was one and watching movies kept hyper me occupied, so there’s that).

So the premise of Angel Heart is that a private detective called Harry Angel, has a new case at hand, to find a man called Johnny Favourite. Except things aren’t quite that simple, and Johnny doesn’t want to be found. Let’s just say that, amongst the period detail and beautiful scenery, it all gets really, really nasty fast.

All I could remember about the movie in question was that it dealt with voodoo, Robert DeNiro was in it, (I also recalled another detail but can’t reveal it as it’s *spoilers*), and that this was one of those movies where Mickey Rourke was hot.

Upon viewing the movie I was like, HOLY SHIT this movie is truly very twisted and no wonder people are shocked I saw this at the tender age of six. This movie has one hell of a twist back in the day before twist endings were a thing, so it was very innovative in that way. The mystery was captivating and the gore factor was high, so if you’re into that, you’re gonna love it (and yeah I’m a creep and love that).

The movie has Angel (Mickey Rourke) traveling from Brooklyn to New Orleans in search of the ever elusive Johnny Favourite (that Robert DeNiro’s character wants to find because he’s got a score to settle with him), only that everyone that knew Johnny begins to die in horrible ways and Angel is made to look like the culprit of those murders when he is not. So will he be able to find Johnny before he gets framed for murder? And will the voodoo queen Epiphany ( Played by a pre-Lenny Kravitz & Jason Momoa, wide-eyed Lisa Bonet) help Angel in his endeavor to find Johnny or is she simply going to bring his downfall? The stakes are high and the mystery is very much intriguing.

I really enjoyed my this movie and think that six years old me had impeccable taste for being so young (and probably was a teeny bit twisted).