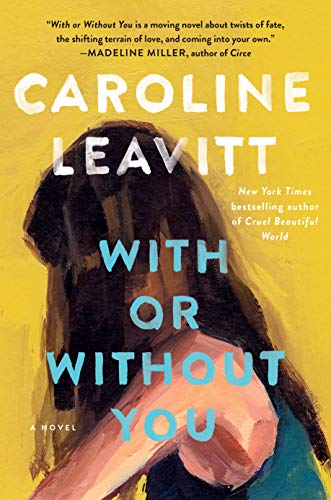 Is love really all there is?

New York Times bestselling author Caroline Leavitt writes novels that expertly explore the struggles and conflicts that people face in their search for happiness. For the characters in With or Without You, it seems at first that such happiness can come only at someone else’s expense. Stella is a nurse who has long suppressed her own needs and desires to nurture the dreams of her partner, Simon, the bass player for a rock band that has started to lose its edge. But when Stella gets unexpectedly ill and falls into a coma just as Simon is preparing to fly with his band to Los Angeles for a gig that could revive his career, Simon must learn the meaning of sacrifice, while Stella’s best friend, Libby, a doctor who treats Stella, must also make a difficult choice as the coma wears on.

When Stella, at last, awakes from her two-month sleep, she emerges into a striking new reality where Simon and Libby have formed an intense bond, and where she discovers that she has acquired a startling artistic talent of her own: the ability to draw portraits of people in which she captures their innermost feelings and desires. Stella’s whole identity, but also her role in her relationships, has been scrambled, and she has the chance to form a new life, one she hadn’t even realized she wanted.

A story of love, loyalty, loss, and resilience, With or Without You is a page-turner that asks the question, What do we owe the other people in our lives, and when does the cost become too great?

This is one intense, realistic, and emotional ride. Simon and Stella met twenty years ago and they’ve been together ever since. They’re convinced they’re soulmates, but from Chapter One I quickly get the feeling that each person has spent twenty years yearning the other would change. Simon used to be in a successful band in his early twenties and although he’s now forty, he still wants to live the rock n roll lifestyle. Stella on the other hand, has spent twenty years hoping that he’d warm up to the idea of domestic life. She’s a nurse, and all she wants is to get married and start a family. Despite the two being very much in love, this book proves that sometimes, love isn’t enough when your paths are not parallel to one another, and each individual longs for something else. In fact, I don’t think that Stella and Simon were ever a good match because each person secretly despised the lifestyle of the other.

But everything changes when after a night of heavy drinking and drug-taking lands Stella in a coma. Simon is distraught and doesn’t know what to do. After several months, Stella wakes up but she’s not the same. She has acquired a new artistic skill that she didn’t have before. And now this becomes more important to her than anything else. In the meantime, Simon has gotten closer to Libby, the doctor that was treating Stella during her coma.

You’ll enjoy this book if you love flawed characters who act in a realistic way. The first half of the book was fast-paced for me, but it kind of slowed down towards the middle portion. If you love literary books with the focus being on relationships, then you’ll love With or Without You.

*Thank you so much to NetGalley and Algonquin Books for the digital copy of this book in exchange for an honest review!