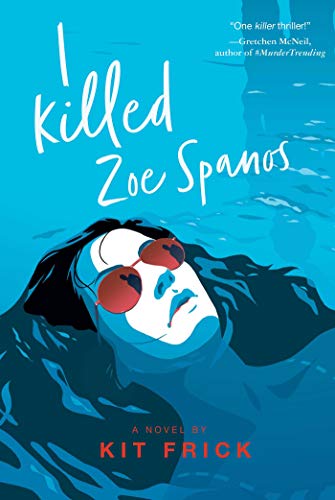 When Anna Cicconi arrives to the small Hamptons village of Herron Mills for a summer nanny gig, she has high hopes for a fresh start. What she finds instead is a community on edge after the disappearance of Zoe Spanos, a local girl who has been missing since New Year’s Eve. Anna bears an eerie resemblance to Zoe, and her mere presence in town stirs up still-raw feelings about the unsolved case. As Anna delves deeper into the mystery, stepping further and further into Zoe’s life, she becomes increasingly convinced that she and Zoe are connected—and that she knows what happened to her.

Two months later, Zoe’s body is found in a nearby lake, and Anna is charged with manslaughter. But Anna’s confession is riddled with holes, and Martina Green, teen host of the Missing Zoe podcast, isn’t satisfied. Did Anna really kill Zoe? And if not, can Martina’s podcast uncover the truth?

This novel has been receiving a lot of buzz in the past few months, and with good reason. Thrillers for me are always a hit or miss since some thrillers latch onto the systematic formula and then I’m capable of figuring out the killer 30% into the book. This book is different though. We know the narrator is unreliable, but at the same time, we also know that everyone else we meet is just as unreliable. Plus, we’re given memories that we’re unsure whether they’re true memories or merely false memories. Thing is, I could never truly tell what was going on in this novel and that’s a good thing! I like being puzzled and pretty much suspecting EVERYONE for murder rather than it being easy and having the one creepy person in the book be the killer.

I rather enjoyed the varied story-telling that was provided in the book. The past was told in the first person present tense by Anna, a girl who bears a striking resemblance to the dead girl in question, Zoe Spanos. While the present is told in the third person and we also get a podcast transcript. So the book has a lot of variety in story-telling.

The book is marketed as being a cross between Courtney Summer’s Sadie and the gothic novel Rebecca. This is what this book has in common with those two novels: Sadie: There’s a missing girl and the book is told in podcast transcript 50% of it. But that’s where the comparison ends. Rebecca: The protagonist loves to sketch, so does Anna. The protagonist is also a middle-class girl who marries a rich widower. Anna is a middle-class girl who is hired to be a nanny during the summer for a wealthy family in the Hamptons. The novel Rebecca is plagued by the memory of Rebecca and the maid who is obsessive about her. This novel is plagued by the memory of Zoe Spanos and her ex-boyfriend’s mother who is obsessed with her. Again, this is where the comparisons end.

I Killed Zoe Spanos is a taut thriller and has you second-guessing every character in the novel and for that I LOVE IT. This thriller is twisty and will leave you guessing, and like I said, NO ONE IS SAFE. Anyone could be the killer and trying to figure out what exactly happened to Zoe Spanos that fateful New Year’s Eve night will have you reading way past your bedtime.

Read this if you love twisty thrillers with unreliable characters.

*Thank you so much to NetGalley and Margaret K. McElderry Books for the digital copy of this book in exchange for an honest review!