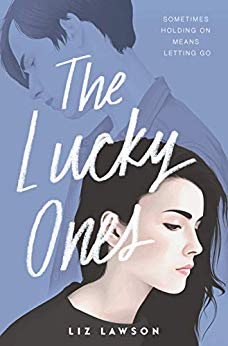 How do you put yourself back together when it seems like you’ve lost it all?

May is a survivor. But she doesn’t feel like one. She feels angry. And lost. And alone. Eleven months after the school shooting that killed her twin brother, May still doesn’t know why she was the only one to walk out of the band room that day. No one gets what she went through–no one saw and heard what she did. No one can possibly understand how it feels to be her.

Zach lost his old life when his mother decided to defend the shooter. His girlfriend dumped him, his friends bailed, and now he spends his time hanging out with his little sister…and the one faithful friend who stuck around. His best friend is needy and demanding, but he won’t let Zach disappear into himself. Which is how Zach ends up at band practice that night. The same night May goes with her best friend to audition for a new band.

Which is how May meets Zach. And how Zach meets May. And how both might figure out that surviving could be an option after all.

This isn’t for the faint-hearted. The way the author depicts grieving in this novel is a true punch to the gut. May simply cannot get over the way her brother Jordan was shot and killed during a school shooting while she hid in the closet and did nothing. Feelings of guilt plague her, but she’s also consumed with anger and vengeance. She thinks that nobody can understand her pain until she meets Zach.

Zach has become a social pariah at his school the moment his lawyer mother took a case that left everyone speechless.

Zach and May become kindred spirits until they each realize who they really are. Zach’s mother is defending the shooter that killed May’s brother. And for months May has been rendering Zach’s family life hell by secretly vandalizing their property and leaving threatening letters in their mailbox.

If you’re hoping for a light YA read with romance speckled throughout, then this isn’t the book for you. Sure, this book has the hopes of a blossoming romance, but it isn’t the heart of the novel. The real purpose of this book is to show the reality of surviving a school shooting and how even when you’re the “lucky ones” to survive your new normal is just as terrible as being dead. A must-read for anyone at any age to see just how prominent and damaging active shooters have become in both schools and other locations.

*Thank you so much to NetGalley and Delacorte Press for the digital copy of this book in exchange for an honest review!