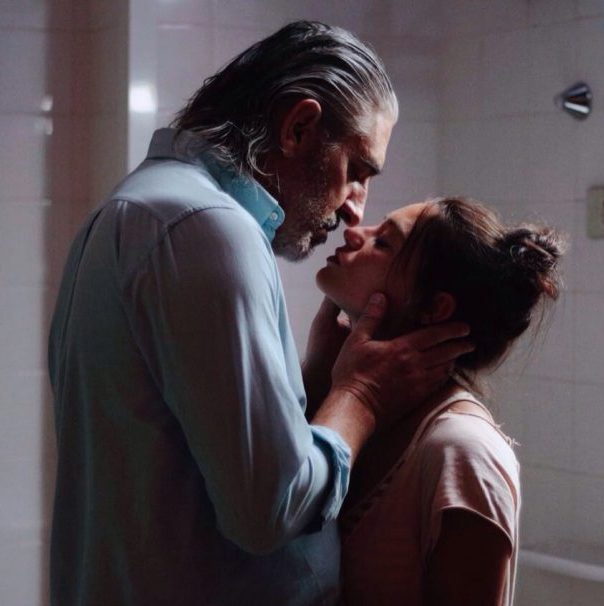 I had been planning on attending the Santa Barbara Film Festival, then work got busy and I only knew about which films were going to be screening at times the same day that they were screening so trying to take time off at the last minute was kind of difficult. However, out of the films that I was proposed to watch, I was curious about Bonifacio Angius’ film (maybe I was biased cause he’s a fellow Italian as myself), Ovunque Proteggimi (Wherever You Are for the English public) that was competing at the festival. I contacted the director and he graciously allowed me to stream the film since I couldn’t make the screenings.

I didn’t read the plot summary before plunging headfirst into the film, but I often find that going into a film blindly renders it more enjoyable as I have no expectations. The film is about Alessandro, an aging singer that primarily does gigs at local events with his childhood friend. One night, after a particularly failed gig due to the low audience outcome, his friend tells Alessandro that he’s no longer going to play backup for him and that he too, should think about quitting the local music scene. Depressed, Alessandro decides to hit up a club where he meets a group of young girls who want to buy coke. To show off, he assures them that he can get the money to buy the coke, he simply needs to stop by home first.

Once home, we learn that Alessandro still lives with his mother, and it’s her who he begs for the money. That’s when we learn that the protagonist has probably been doing this for years, abusing drugs and alcohol, and on this hapless night, his mother, fed up, decides to have him taken away to rehab. At rehab, Alessandro meets Francesca, a misfit like himself, whom he feels some affection towards, although he doesn’t readily admit to it at first. When the two of them are released on the same day, on a whim, he decides to accompany her to her house and that’s when Francesca learns that her parents had the child services take her son away.

This is when Alessandro begins to see the injustices that women who don’t follow societal norms befall to. Throughout the movie, we’re told by her parents and the child services that Francesca is a former junkie and “whore,” however, we never witness her using drugs, being promiscuous, nor crazy. The only time we see her lose her composure is when she is told that the child services has taken her son away (so in a way it’s understandable).

Just like the audience feels sorry for Francesca and her plight, so does Alessandro who decides to help the woman reunite with her son. This journey allows us to understand that Alessandro deep down is a man with a good heart who can rise above his own flaws to do what he thinks is morally right, whether that is viewed right by society.

Throughout the movie, we can’t help but cheer for these two unlucky lost souls who clearly mean nothing to the people closest to them. This film isn’t overly dramatic, but it explores some heavy themes such as mental health stigma, motherhood, and the cost of following your dreams. The two leads Alessandro (played by Alessandro Gazale) and Francesca (played by Francesca Niedda) have quiet chemistry and they play their characters in such a broken, vulnerable manner that they manage to steer clear of any tropes or cliches. These characters feel real and because of that, we’re invested in their story, and we want to see them have a happy ending.

Ovunque Proteggimi is a film that will seize your heart and squeeze it ruthlessly, leaving you brutally breathless. Watch this if you want to experience a film that is full of heart and humanity. Hats off to Bonifacio Angius for directing a film that gives voices to those in society who usually aren’t allowed to have one.

One thought on “Film Review: Ovunque Proteggimi (Wherever You Are)”