The summit of happiness is reached when a person is ready to be what he is. – Erasmus

Since the WWII bombing that flattened the city in 1940, poor Rotterdam has been like a misunderstood wild child with a non-traditional upbringing. She’s been called ‘The City Without a Heart.’ Shaped by many different events and architects since then, Rotterdam doesn’t quite fit into the Dutch culture the way Amsterdam, The Hague, or Delft does. On more than one occasion, my enthusiasm for Rotterdam was met by locals with a lifted eyebrow and reply along the lines of,

“Really? Why Rotterdam? (Insert Dutch city) is so much more charming.”

Rotterdam is not what the Dutch would call gezellig: that warm, squishy feeling you get when all is time-honored, quaint, and cozy. No, she sticks out from traditional European cities like a sore thumb. 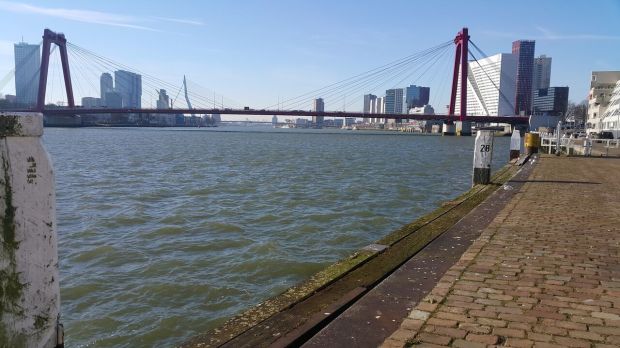 Bright yellow ‘Cube Houses’ balance on their corners atop a busy overpass like thrown dice frozen mid-roll. Blaak Station looks like a landed UFO in the market square. The angular, swan-like Erasmus Bridge poses high over the river Nieuwe Maas. There’s nothing traditional or charming about it. It’s tall, proud, sleek – just like the rest of the city. Though bruised from an unfair fight, Rotterdam’s modern and colorful. She’s survived a torrid upbringing. Amidst inner turmoil, she grew through misdiagnosed remedies and therapies and prevailed with hopes of a happier future. Formed at the hands of so many others’ desires, Rotterdam’s own identity seems ambiguous. She complicated. 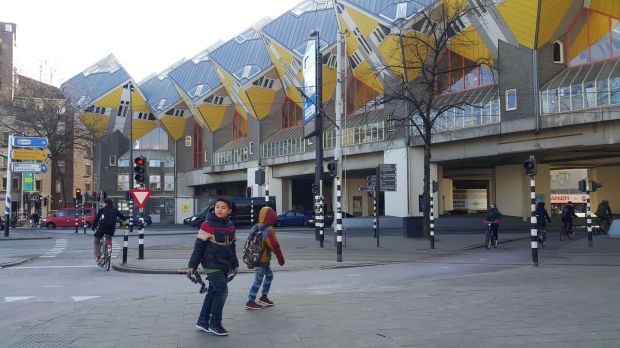 But look closer. She is one of the most important cities of her time. The largest port in Europe, fourth largest in the world. An international haven – probably more so in the near future with the coming of Brexit. She welcomes in the world, serving as a gateway to an expanded, cohesive way of thinking. And she does it quietly, compassionately, without theatrics or fuss.

I relate to Rotterdam. I’ve had my fair share of personal ‘bombings’ and well-meaning ‘architects’ try to build and reshape me throughout my life. It’s helped me see who I was and, now, envision who I want to become. A lot of people don’t understand the way I think or act. I’ve always stuck out like a sore thumb myself. It’s only until now that I’m finally learning to be okay with that. For me, pushing through my comfort zone and finding my true self is like coming home. Like stumbling toward the heart of a place that isn’t on a map. It’s the same reason I find Rotterdam gezellig.

On my last day in Rotterdam, it snowed. I didn’t recognize it at first, this white fluffy thing that had landed on my scarf, then another. It had been years since I’d seen an actual snowflake. But when I looked up, the flurry swirled in around me, lit up by the late afternoon sunlight. I stopped and scanned the street, wondering if I was the only one witnessing this wondrous moment. It was just me and an old man walking his Jack Russell Terrier up ahead in the distance. I was suddenly in my own private snow globe. The subdued disappointment I’d been mulling over about my final hours in the city evaporated, instantly replaced with the buzz of excitement. I gazed up into the gray clouds billowing above the high buildings, half-expecting to catch the glimmer of a glass dome in the sky. The air glittered all around me. It was like an ending from a movie; the city saying goodbye.

Is it narcissistic to see a part of myself in such a great city? Perhaps. But it’s the potential to assume her best qualities that I yearn to emulate the most: her even-keeled nature, her sensibility, her acceptance, unassuming charm and colorful personality. Many don’t understand her because she is so different. But I think Rotterdam’s beautiful. She allows room for the possibilities.