Recently, I was asked to view an advanced screening of Firefly Lane, the newest series to hit Netflix in February, based off of the New York Times best-selling author Kristin Hannah’s 2008 novel of the same name. I purposely didn’t read a plot summary before diving in, but I did decide to watch it based off of the fact that Katherine Heigl (Grey’s Anatomy fame and early aughts rom-com queen) and Sarah Chalke (Scrubs and Rick & Morty) star as the two best friends, Tully Hart and Kate Mularkey.

The show is split in three time frames, present 2007, past 1982, and childhood past 1974. The show, like the novel, shows the spanning of a 30-years-old friendship between two best friends who first met at the pivotal age of 14 when living on the same street, Firefly Lane.

Tully Hart has always been ambitious and beautiful, the stark contrast of Kate Mularkey who’s intelligent but mousy. The two have always envied the life of the other. Tully envies Kate’s family, while Kate envies Tully’s beauty and charisma.

I only got to view the first two episodes, but episode one shows us meeting the protagonists at their lowest points. Tully is a successful talkshow host but is worried that her beauty is diminishing and feels like her talent is wasted on the talkshow, while Kate is trying to deal with a divorce and trying to navigate work again after being out of the workforce for the past fourteen years.

Both actresses excel in their roles and compliment one another. My favourite aspect about this show is the enduring friendship between the two protagonists and how even the possibility of a love triangle doesn’t seem to derail how they feel about each other. If anything, this series focuses on how maybe your soulmate is your best friend and not your romantic partner, and that the greatest love story you’ll ever live is the one you have with your childhood best friend. At a time when women are always seen competing against one another on shows or movies, this is refreshing. Again, I’ve only viewed the first two episodes, so I ope that they continue on this course and don’t derail into the normal tropes that I despise about female friendships.

One of the moments I loved best about the show is when Tully, noticing that Kate is feeling frumpy, decides to swap dresses with her so that her best friend can feel beautiful in a more attention-seeking dress. Or when Tully is speaking with Kate’s daughter, and Kate’s daughter is complaining about her mom and calls her a bitch and Tully stops her and says, “Hey, don’t talk about my best friend like that. Your mom is nice, she was nice at 14 and no one is nice at that age.”

If you’re someone who loves friendship stories, I think you’re really going to love this series and you should definitely check it out.

*Thank you to Netflix for advance screening!

By now many of you may have watched “Thirteen Reasons Why” on Netflix, the TV series inspired by Jay Asher’s novel of the same name. The principal concept of the show and book is that the protagonist Hannah Baker (Katharine Langford) commits suicide and leaves behind seven cassette tapes, where each side chronicles one of the reasons why (and person) that lead her to the dark path of suicide.

I’ve always been an advocate of bringing light to mental health and talk of teen suicide, and although many may see this series as a step towards that, sadly, in many ways it’s not. Suicide is glamorized in both the series and book, demonstrating how one’s death could be used as a sort of guilt-trip revenge towards the bullies. I understand that both the show and novel tried to show how devastating the effects of bullying can be. What differs between the book and show, is that the book’s reasons for Hannah’s suicide weren’t as extreme as in the show, where she actually falls victim of a sexual assault by Bryce (Justin Prentice).

The show goes to show how Hannah’s death affects those that are left behind, especially Clay Jensen (Dylan Minnette) who had a crush on her but never truly admitted his feelings for her. And while Hannah blames him as one of the reasons why (not openly, as she says he never did anything wrong to her, but on the same token, she was hoping he would’ve stepped by and made her feel loved and maybe then she wouldn’t have slit her wrists).

The problem with the show is that although Hannah had legit reasons to be hurt, ultimately it was her decision to take her own life. And it was depicted in a way that she did it because she blamed those in her life. Without realizing it, the show is sending a truly scary message, telling people who are dealing with those problems that this is how they should handle them as no one will be there to help you. When that isn’t always true. Throughout the entirety of the show, we never see Hannah approaching her parents with her problems (and her parents were depicted as being very loving and supportive) which baffles me as to why she didn’t go to them and rather heavily relied on her counselor Mr. Porter (Derek Luke) as the only adult who could save her (which of course he failed because from both the book and show the character was absolutely inadequate to even be a counselor and who was blind to all the signs of help the poor girl needed). 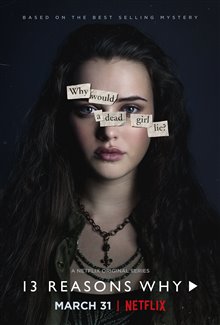 Although the show has brought up discussion about mental health and teenage suicide, it lost its mark on how to actually get help if that’s what you’re seeking. If you or anyone else you know is dealing with bullying, or thinking about suicide, please refer to the hotlines below and no matter how the show glamorizes suicide, ending your life is never the right solution.

If someone can take anything from the show and novel is this: be nicer to one another. It could literally save a life.

For bullying please refer to: http://www.stompoutbullying.org