Ever since I happened upon the Instagram page for Twisted Wonderland Perfumery, I knew that I wanted to try it. The aesthetics totally tugged at my dark heart. Perfume for those with Gothic tendencies? Lip balms inspired by horror movies? I’m in!

For my first order, I decided to go with a perfume and lip balm, although after visiting their website I noticed that they offer so much more (horror-themed soaps and bath bombs are just some of the other cool items they have). 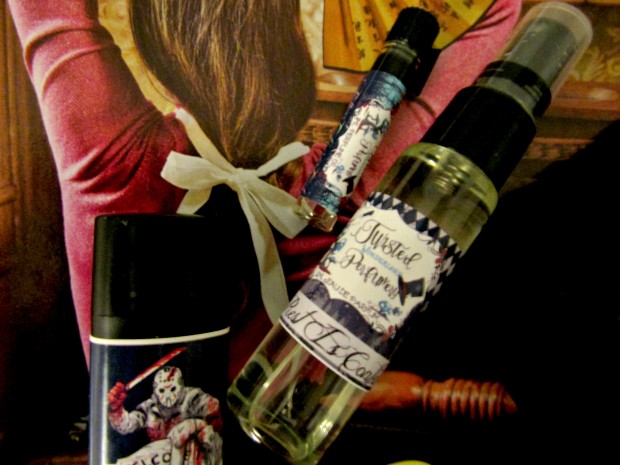 The perfume I selected was The Rest in Confetti, which is described as “A cup of white tea, elegant white musk, marshmallow buttercream cupcakes, and soft rose petals.” I expected this scent to be sweeter based on the marshmallow buttercream cupcakes description. Rather, it was a bit muskier (and smelled more like patchouli which I’m not a huge fan of). Overall, the scent isn’t annoyingly persistent and after awhile the muskier notes die out and you’re left with the sweeter notes (which is what I really wanted all along). Scent-wise this isn’t my absolute favourite but I’m willing to try out the other scents they have to offer cause the formula is definitely good.

Now, anyone who knows me knows that I’m a lip balm addict. Since I consistently wear lipstick every day, all day long, it means that my lips need some major TLC come night. Part of my nighttime routine is to lather on about three thick layers of lip balm before my head hits the pillow for some serious z’s. This routine allows me to wake up with incredibly soft, smooth lips every morning. Which means that I am very picky when it comes to lip balms cause no simple lip balm will do.

There’s a certain formula/texture that I favour (meaning more of the thick and emollient kind) and I can testify that this lip balm certainly gets my stamp of approval! I choose the Friday the 13th inspired Jason Voorhies lip balm called S’More-Hees, cause I have an unhealthy obsession with all things s’mores and of course a lip balm named after a summer camp serial killer would smell like my favourite campfire treat! As an aside, I’ve never been to summer camp, nor have I ever been camping, so the only times I’ve had real S’mores in real life is whenever we’d have bonfires at the beach at night.

The scent of this lip balm is I-N-C-R-E-D-I-B-L-E! You’ll certainly feel like you’ve just smacked some marshmallows on your lips, and the feel of the lip balm is incredibly soft. Just watch out for any machete-wielding hockey-masked serial killers coming your way!

Overall, this is a cool niche online shop for all things dark and bloody. I can see these items becoming awesome Halloween gifts or party favours for any horror-themed party!

Where you can buy these awesome items: Twisted Wonderland Perfumery site 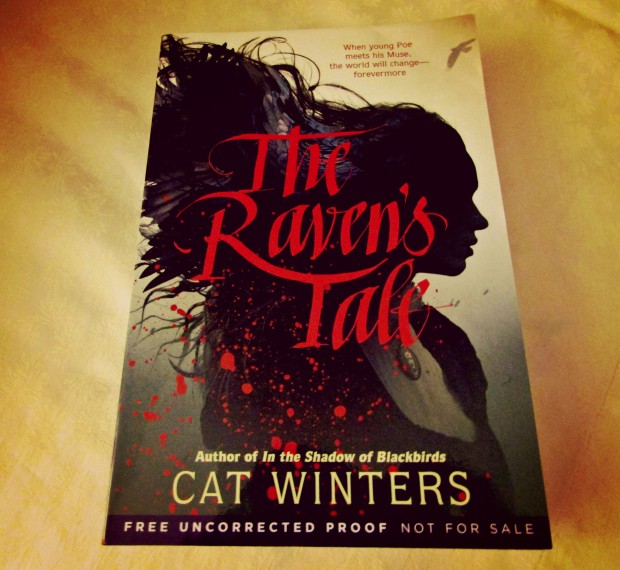 “The life still there, upon her hair – the death upon her eyes.”

Seventeen-year-old Edgar Poe counts down the days until he can escape his foster family–the wealthy Allans of Richmond, Virginia. He hungers for his upcoming life as a student at the prestigious new university, almost as much as he longs to marry his beloved Elmira Royster. However, on the brink of his departure, all his plans go awry when a macabre Muse named Lenore appears to him. Muses are frightful creatures that lead Artists down a path of ruin and disgrace, and no respectable person could possibly understand or accept them. But Lenore steps out of the shadows with one request: “Let them see me!”

I first came into contact with Cat Winters’ writing in the form of the short story, Emmeline, from the thrilling Slasher Girls & Monster Boys. I loved her short story so much that I decided to check out her other works (this is why I love anthologies because it gives you the chance to discover new authors). As a reader, you can’t help but notice just how poetic and elegant Winters’ prose is in all of her writing (think Anne Rice if she were to write YA). So when I found out that Winters was writing a book about my favourite poet’s teenage years, I was beyond thrilled! Honestly, no one else could possibly be a better fit to write about Poe than Winters. I’ve been waiting to read this book for over a year now and was fortunate enough to have received a signed copy of the ARC from the author (a huge THANKS!).

From the very first page, one is completely immersed into the story of Edgar “Eddy” Poe and his beautiful, yet creepy looking muse, Lenore. I’m a huge fan of dual narration, so I loved that we got to know both Poe and Lenore. Most Poe fans know that the Gothic writer had a very tragic life, but to see it come alive in fiction almost makes one a spectator of his formative years. Plus, I really loved the idea of muses coming to life, it kinda reminded me of the Greek muses that were actual women and not just a notion. Not to mention that Winters’ impeccable prose fits seamlessly perfect with any of the Poe-inspired figures of speech.

This is a beautiful tale told beautifully, by a writer who clearly loves her subject as much as I do. You’ll be fascinated and enchanted by the characters and gorgeous prose, and maybe its magic will make you want to discover or revisit some of Poe’s works because that’s what amazing books do. They don’t end when the story ends, and Poe’s legacy is one that will continue forevermore.

Short Q & A With The Author:

What about Edgar Allan Poe’s life made you want to write about him?

I wanted to write about Poe precisely because I didn’t know anything about his life, other than the fact that he married his thirteen-year-old cousin when he was twenty-seven and was supposedly an opium addict (the latter of which has been disputed by scholars). Teachers introduced me to his work when I was in middle school, and he was assigned to me as my American author to study in my eleventh-grade English class. Gothic literature mesmerized me from a very young age, and Poe’s work was no exception.

A few years ago, after using solely fictional characters in my novels, I challenged myself to write about the teenage years of a real-life historical figure, and Edgar Allan Poe immediately came to mind as the perfect subject. Even though his macabre stories and poems are iconic, and he has one of the most recognizable faces in literary history, most people don’t know anything about him as a person. Originally, I didn’t even know where he lived as a teenager, so everything about him was new to me when I first dove into the research.

What is your favourite Poe short story? How about his poetry?

I really love Poe’s short story “The Masque of the Red Death.” To me, it reads like a sinister, Gothic fairy tale, and it’s an excellent example of how to create an atmosphere in fiction—and how to pack a punch with a story’s ending. I love Poe’s poetry even more than his stories, so choosing just one favorite it difficult. “Annabel Lee” was the very first work of his that I ever read, and I’ve always found it both beautiful and chilling. “The Raven,” of course, is a top choice, because it’s quintessential Poe. I’ve also become a big fan of “The Bells.” I wasn’t familiar with that particular poem before writing THE RAVEN’S TALE, but Poe’s rhythm and language—and the way his tone changes throughout the piece—is spellbinding. I love how the poem sounds like bells when read aloud.

After so many years left wondering, fans of Poe finally get a chance to meet Lenore in your novel. Do you think muses are indispensable to an artist, or can an artist create without a muse?

Well, there are both mythological muses and human muses. Both come into play in THE RAVEN’S TALE, and I think in some ways both versions influence all writers. My literary agent will frequently tell me to let my muse guide me, as if a supernatural being hovers around me, inspiring me and deciding when and how I should write. We writers tend to also complain about our muses turning stubborn and silent. I wanted to play with those ideas in THE RAVEN’S TALE, which is why I created the character of Lenore, a mystical, macabre muse who desperately needs teenage Poe to write Gothic works in order for her to survive. Unlike most muses, who remain hidden, she steps out of the shadows of young Eddy’s bedroom wall and demands to be seen. She represents the voice inside all creative souls that drives us to share our work with the world. It’s the same voice that fills our brains with new ideas, often when we’re not expecting ideas to appear, and it sometimes, sadly, falls silent when we truly need inspiration, leading to the dreaded “writer’s block.”

I think all writers tend to have real-life muses, too, whether we realize it or not. Many of my novels involve dark-haired leading men with emotional pasts, and I’m married to a dark-haired guy whom I met when we were both teens.

What part of researching for this novel did you most enjoy?

In 2017 I traveled to Virginia and explored the city of Richmond, where Poe lived the majority of his teen years, and Charlottesville, where he attended the University of Virginia at the age of seventeen. It’s one thing to read about people and places of the past in books and articles, but to actually walk in a historical figure’s footsteps brings a whole new dimension to research. Poe’s dorm room sits on display at the university, and it was incredible to map out my dormitory scenes while looking at and photographing his actual room.

When teaching poetry, I was asked by a student why so many poets and writers seemed to have had experienced some form of tragedy. Do you think that suffering is essential for the artist or can an artist still create relateable material without experiencing pain?

Some artists, including Poe, certainly endure more tragedy than others, but I think most everyone experiences some degree of pain in their life, whether it’s death, loneliness, injury, oppression, bullying, or anything else that leaves a mark on a person. For creative individuals, that pain often works its way into art, just as they also pour their loves and passions into their projects. I don’t think a person has to suffer a horrifying tragedy in order to turn into a great artist, but I think all artists use a version of their tragedies (and fears and challenges) in their works, including comedians, who often cite their pain as the source of their material. 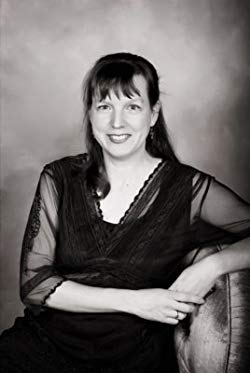