We had to devolve to realize we’d never really much evolved.

George A. Romero invented the modern zombie with Night of the Living Dead, creating a monster that has become a key part of pop culture. Romero often felt hemmed in by the constraints of film-making. To tell the story of the rise of the zombies and the fall of humanity the way it should be told, Romero turned to fiction. Unfortunately, when he died, the story was incomplete.

Enter Daniel Kraus, co-author, with Guillermo del Toro, of the New York Times bestseller The Shape of Water (based on the Academy Award-winning movie) and Trollhunters (which became an Emmy Award-winning series), and author of The Death and Life of Zebulon Finch (an Entertainment Weekly Top 10 Book of the Year). A lifelong Romero fan, Kraus was honored to be asked, by Romero’s widow, to complete The Living Dead.

Set in the present day, The Living Dead is an entirely new tale, the story of the zombie plague as George A. Romero wanted to tell it.

It begins with one body.

A pair of medical examiners find themselves battling a dead man who won’t stay dead.

In a Midwestern trailer park, a Black teenage girl and a Muslim immigrant battle newly-risen friends and family. On a US aircraft carrier, living sailors hide from dead ones while a fanatic makes a new religion out of death. At a cable news station, a surviving anchor keeps broadcasting while his undead colleagues try to devour him. In DC, an autistic federal employee charts the outbreak, preserving data for a future that may never come.

Everywhere, people are targeted by both the living and the dead.

We think we know how this story ends.

It’s no secret that George A. Romero was pretty much the progenitor when it comes to the zombie genre. First in the films and then even in comic books and novels. If you’re a fan of George A. Romero, then you’re well aware that the iconic director’s zombie movies aren’t merely a gore fest. Instead, Romero uses the zombie genre to explore the human condition or reveal the incompetence of government or lack of empathy in humans. Ultimately, the real monsters in Romero’s movies are rarely the zombies, but rather the humans. We’re deadlier than the undead because we’ll turn on our own when the going gets tough. Unfortunately, Romero passed away in 2017 and never was able to complete the novel himself, so his widow asked Daniel Kraus to complete the novel using Romero’s notes. The end result isn’t disjointed nor can the reader tell where Romero begins and Kraus takes over. The writing style is seamless throughout the whole novel and doesn’t change.

Now, I don’t know how much Romero had completed before his death, but this novel is a horror saga (it’s over 600 pages!) but it doesn’t mean that there’s ever a moment of dullness, because there isn’t. There are so many diverse characters in this novel, much like how Max Brooks’ novel World War Z was fashioned. Third person omniscient works superbly as there’s so much ground to cover that we need to know what’s happening to everyone at any given time. Sure, there are some characters that I favoured over others, but the fact that Romero always managed to create characters that we cared about means that even when we know that most of them will face dire endings, in our heart of hearts we can’t help but hope that there’s another way out. But this novel isn’t about comfort, this novel is brutal. I don’t read many zombie books but since I am a huge fan of Romero’s zombies, I knew that I had to read this novel and I’m not disappointed. If you’re going into this book thinking it’s going to be full of zombies, you are correct. But you’re also going to walk away with a feeling that ultimately the book wasn’t about zombies, but it’s about us, and how much humans CAN be both resilient and full of heart.

For a book about the undead, you’ll depart the novel with all the feels. You’ve been warned.

*Thank you so much to NetGalley and Tor Books for the digital copy of this book in exchange for an honest review!

Do you love horror? Do you fall in that group of people that wished Halloween wasn’t just one night a year? If you answered YES to both these questions, then ScareLA is the perfect convention for you! It celebrates the horror genre, but also the spirit of Halloween with frightening haunts and mazes. I managed to snag Press Passes for this event, and took The Inkblotters to the appropriately darkened convention for some spooky fun!

The event took place during the weekend of August 25-26. As soon as you entered you were immersed into the scary realm of darkness with a zombie pandemic haunt, which was the only interactive fright zone where we were told that if touched by the zombies, then we were considered “infected.” Luckily, I managed to survive the zombie apocalypse, but the same fate didn’t befall my boyfriend and friend who were both brought into a separate room to be “executed.” 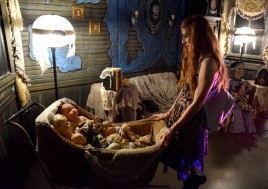 The next haunt we checked out was an asylum dubbed Nightmare Clinic, which wasn’t too creepy unless you fear clowns and tiny spaces (I wouldn’t recommend the maze portion of the haunt for those that suffer from claustrophobia as all your red flags will be flashing wild). The last haunt we checked out was a medieval one called Descension Castle, that had a banshee on the loose. I appreciated the amount of detailed work that was put to create a castle in the middle of the convention floor.

Besides the haunts, ScareLA offered virtual reality, panels, live shows, photo ops, short film viewings, zombie ballet, and many other horrificly fun amusements. Out of the three short films I viewed, my favourite was Holy Fatman’s Please Love Me Forever, wherein a surreal Tim Burtonesque world, Lili 14-year-old albino lives with her strange scientist mother, Claudie, who is constantly replacing aging parts of her face with new younger parts. When Lili declares her love to her handsome neighbor, Lyesse, and he doesn’t reciprocate, Lili decides to take out his heart to understand why the boy doesn’t love her back. The movie was visually stunning and ended with such a bang that I totally recommend watching it!

Another major component of ScareLA were all the vendors. There were shops for anything your macabre heart desired from custom-made corsets and hats, FX makeup, feral kitty adoptions, and rare international horror DVD’s and comics. My favourite shop hands down was Dreadful Little Things, where old dolls were repurposed for a new life. The dolls found in that shop were utterly creepy, making Annabelle look like Barbie in comparison. 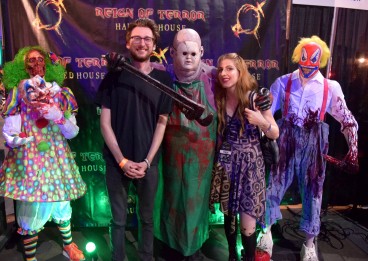 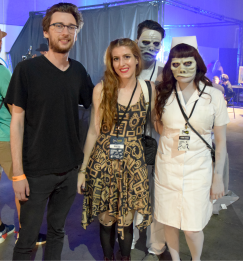 Once you got tired of all the walking, you could relax in the lounge area where you could order drinks (I got a cocktail appropriately named Radioactive Embalming Fluid garnished with a gummy eyeball), and rent headphones for free to get in your zone.

Here I am with George C. Romero

I had a chance to chat with George C. Romero who told me that Rise is going to be a prologue (not prequel as he corrected me) of the Night of Living Dead franchise, that he was hoping to work together with his father George A. Romero, but who sadly passed away. It should be out by November 2019. I also had a chance to interview Robert Mukes of the Rob Zombie House of 1,000 Corpses who was exceptionally nice. I asked him if filming horror movies is more difficult than normal movies, as Robert Englund has always mentioned the struggles horror movies bring to an actor in regards to the makeup and physicality of roles (running, jumping, etc.). However, Mukes stated that for him, he hasn’t noted the difference as he hasn’t had to do extensive makeup like Englund, and that usually his height (a whopping 6’10”!) has been enough to make him appear scary. He’s got a score of movies coming out soon, one of them being a zombie flick entitled Valentine DayZ. Linda Blair of The Exorcist fame was also at the con, but she didn’t seem that keen on wanting to chat, so I didn’t approach her. 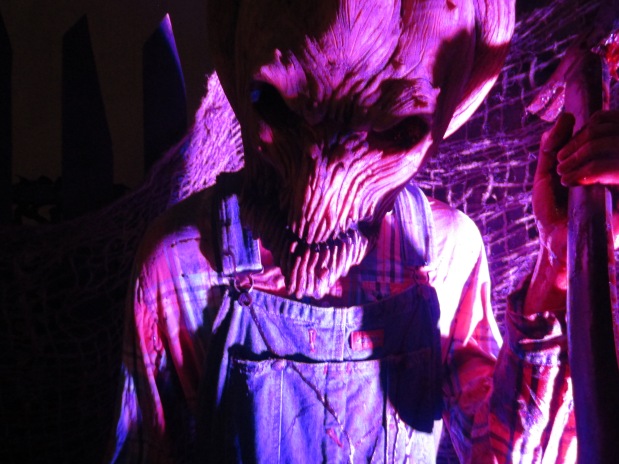 All in all, ScareLA is an immersive experience for those that live and breathe Horror, and I recommend checking it out if you have a chance, you won’t regret it!

For more info check out: SCARELA

Today, the horror genre lost one of the most influential people in its world, director George A. Romero, best known for being the “godfather” of zombies. Unlike any other horror movies in the genre, he often used his zombie movies to confront major political themes such as racism in Night of the Living Dead and capitalism in Dawn of the Dead. In his movies the zombies weren’t always perceived as the villains, while he’d often prefer to depict humans as such instead. You can see his affection towards the zombies in this quote, “My zombies will never take over the world because I need the humans. The humans are the ones I dislike the most, and they’re where the trouble lies.” Or when he stated, “I sympathize with the zombies and I’m not even sure they are villains. To me they are this earth-changing thing. God or the devil changed the rules, and the dead people aren’t staying dead.”

He not only heavily influenced the zombie genre, but even the horror anthology stories in works like Creepshow and Tales from the Darkside, which helped open the doors for shows like Tales from the Crypt and Freddy’s Nightmares.

I remember watching his movies and shows when I was six years old. Even at that young age I knew that there was something different about his movies than the other horror movies that I was watching at the time. His movies had intellect and a message. His movies made us see that the true evil in the world wasn’t coming from elsewhere, but rather from ourselves. We are the monsters. And as Romero himself said, “I always thought of the zombies as being about revolution, one generation consuming the next.” A statement that is very telling for our times, and one that will probably always ring true.

Goodbye, Mr. Romero, your zombies and your legacy will never die.