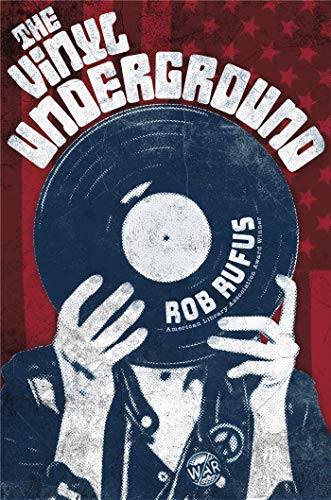 “Be whatever you have to be to get to the edge of the cliff. It doesn’t matter how you get there, what matters is you jump.”

During the tumultuous year of 1968, four teens are drawn together: Ronnie Bingham, who is grieving his brother’s death in Vietnam; Milo, Ronnie’s bookish best friend; Ramrod, a star athlete who is secretly avoiding the draft; and Hana, the new girl, a half-Japanese badass rock-n-roller whose presence doesn’t sit well with their segregated high school. The four outcasts find sanctuary in The Vinyl Underground, a record club where they spin music, joke, debate, and escape the stifling norms of their small Southern town. But Ronnie’s 18th birthday is looming. Together, they hatch a plan to keep Ronnie from being drafted. But when a horrific act of racially charged violence rocks the gang to their core, they decide it’s time for an epic act of rebellion.

I can’t even begin to explain how much I LOVED this book to pieces! The protagonist, Ronnie is still reeling from the death of his older, charismatic brother Bruce, who passed away while fighting in Vietnam. Not only is he dealing with that tremendous loss, he’s also having to deal with the very real possibility that he too will be drafted for the same war. Truth is, Ronnie doesn’t believe in this war and wants nothing more than to be able to finish senior year and figure himself out. Because ever since his brother passed away, Ronnie doesn’t have a clear idea of what he should do with his life. Before he envisioned himself in California with Bruce who dreamed about becoming a radio DJ and Ronnie would be the sidekick. But how much is a dream worth without the original dreamer? Ronnie tries to answer that question throughout the whole novel. He wants to honor his brother’s memory, although he also is trying to figure out what he wants from life and his future.

In the midst of all this, he begins a club with three of his friends called The Vinyl Underground, where they share music. For Ronnie, it’s a way to also share parts of Bruce with his friends since all the vinyls he owns used to belong to his late brother.

What I LOVED about this book were the strong bonds of friendship and how loyal the group was to one another. And although the book did use the trope started by Stephen King in Carrie (where something MAJOR happens during prom or school dance), I really, really loved how devoted the characters were to their cause. And yes, a lot of their actions would make several parents flip out, but I think the novel beautifully depicted teenagers and their will to rebel against injustice.

It takes a lot for a book or movie to move me to tears, and this book did the trick! So if you’re someone who easily tears up, keep tissues on hand! There’s much to love in this book, from the era, the music, the friendships, and one kick-ass female protagonist that will make you wish that someone would turn this book into a movie stat!

Read this book if you’re a fan of coming of age, strong friendships, and rock music.

*Thank you so much to NetGalley and North Star Editions for the digital copy of this book in exchange for an honest review!