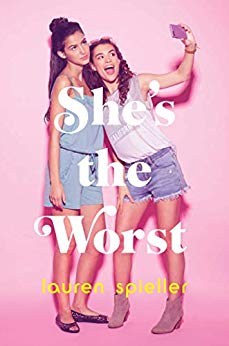 One Day. Two Sisters. All the Feelings.

Sisters April and Jenn haven’t been close in years. Jenn’s too busy with school, the family antique shop, and her boyfriend, and April would rather play soccer and hang out with the boy next door.

But when April notices her older sister is sad about staying home for college, she decides to do something about it. The girls set off to revive a pact they made as kids: spend an epic day exploring the greatest hits of their childhood and all that Los Angeles has to offer.

Then April learns that Jenn has been keeping a secret that could rip their family—and their feuding parents—apart. With only one day to set things right, the sisters must decide if their relationship is worth saving, or if the truth will tear them apart for good.

After weeks of reading very dark books, I decided that I needed something a little more light-hearted (meaning no deaths, destruction, gore, or overall chaos). Being an only child, I’ve always daydreamed about having siblings, and so I was very excited to read a book that focused on the relationship of these two very different sisters, overachiever Jenn, and sporty April.

Another reason why I was drawn to this book is that it takes place in Los Angeles, and it promised a road trip through the city so these sisters could reignite their bond. Living in the Los Angeles area myself, I liked to see what memorable places these girls would go to and if I had been to them myself. First off, I wasn’t aware that there were actual canals at Venice Beach, despite having been there many times (mostly at the boardwalk and beach area), so next time I’m there I’ll have to check that out.

What I enjoyed a lot about this book is that it did provide me the levity I needed, but that’s not to say that this book is fluff, cause it isn’t. This book very realistically portrays a family dynamics and the guilt you feel to try to keep your parents from killing each other when fighting (I probably related to Jenn’s referee role between her two parents a bit too much).

It was interesting to see how two sisters that used to be very close began to drift apart as they got older to the point that they no longer feel like they can even be friends. But the book explores ways how sometimes all you need is to find reasons why you loved that sibling in the first place and how it takes that first step to want to bridge the gap to have a good relationship again.

Everything and anything you can imagine does occur during this 24-hr. Span (the whole book takes place in just one day), and although it’s not a book that deals with mysteries, there are still several surprises that spring up that you didn’t imagine would. That’s to say that, this is a page-turner despite it not being a thriller. There are secrets that are kept hidden and revealed major life-changing decisions that take place.

I recommend this book if you’re into some light reading or love romantic comedies/sister bonding books. Because this novel has it all, especially a ton of feels.

*Thank you so much to NetGalley and Simon & Schuster Books for Young Readers for the digital copy of this book in exchange for an honest review! 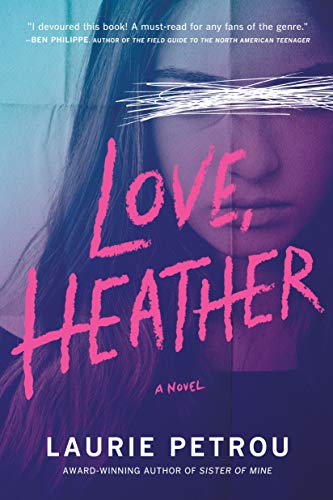 What you see isn’t always what you get.

Stevie never meant for things to go this far. When she and Dee–defiant, bold, indestructible Dee–started all this, there was a purpose to their acts of vengeance: to put the bullies of Woepine High School back in their place. And three months ago, Stevie believed they deserved it. Once her best friend turned on her, the rest of the school followed. Stevie was alone and unprotected with a target on her back. Online, it was worse.

It was Dee’s idea to get them all back with a few clever pranks, signing each act Love, Heather–an homage to her favorite 80’s revenge flick. Despite herself, Stevie can’t help getting caught up in the payback, reveling in every minute of suffering. And for a while, it works: it seems the meek have inherited the school.

But when anonymous students begin joining in, punishing perceived slights with increasingly violent ferocity, the line between villain and vigilante begins to blur. As friends turn on each other and the administration scrambles to regain control, it becomes clear: whatever Dee and Stevie started has gained a mind–and teeth–of its own. And when it finally swallows them whole, one will reemerge changed, with a plan for one final, terrifying act of revenge.

I really enjoyed the first 85% of this book so very much as it detailed the school life of Stevie who is on the verge of entering one of the popular cliques at school with her best friend Lottie when she makes a faux pas, and even her best friend of many years disowns her. That’s when the bullying begins. This is a very timely book as it discusses trans, transphobia, bullying, and school shootings. The book excelled in making teens sound like teens and having Stevie deal with bullying in a very realistic way for teens today (both in school and online).

But everything changes for Stevie when she befriends the loner, Dee who encourages her to rise up against the bullies and exact revenge. Soon, other kids are taking notice and the popular clique is getting what they deserve, although the author does explore the premise of the grey area where sometimes revenge becomes another form of bullying.

For anyone who has watched teen revenge movies ala Mean Girls, Heathers, and Carrie, you’ll love this book and cheer for our cinephile protagonist Stevie and Dee as they defy the high school hierarchy. My only issue with the book was that it got way too preachy towards the end of it. The message it was trying to convey was an important one, but it somehow sounded more like an after school special and so it took me out of the story.

I’m also confused by the fact that everyone keeps referring to this book as a thriller. First of all, we all know who started the Love, Heather revenge and nobody dies (I’m pretty sure there should be murder for a book to be considered a thriller, or at least a threat of murder, but that’s just me). Secondly, I’m getting really fed up with the plot twists for all books lately seem to be some form of mental illness. Mental illness shouldn’t be a plot twist, that’s just lazy writing! And lastly, Stevie never takes revenge on the one person that totally deserved it the whole time! Sure, they try to embarrass said person, but they never truly pay for their wrongdoings and that pisses me off when it’s a book about revenge.

I did enjoy the book a lot up to the plot twist and ending. The book is a page-turner because you do want to find out what is going to happen next, but all that climax for such a poor plot twist that was NEVER referenced in the conclusion since the protagonist conveniently decided not to mention it to anyone is what turned me off at the end. Which is sad, because I would’ve ranked this book higher had the last portion of the novel been better or more satisfying.

*Thank you so much to NetGalley and Penguin Random House for the digital copy of this book in exchange for an honest review! 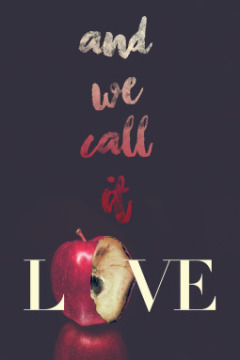 Clare and Zari are best friends. They write music together, go everywhere together, and they know everything about the other. At least they did before Zari started dating Dion. The more Zari falls for Dion, the less she has time for anything else. At first, Clare chalks it up to a new and exciting relationship, and she tries to be happy for her friend despite her loneliness. When Zari starts to show up to school with half-hidden bruises, Clare knows there’s something darker about this relationship that has to be stopped.

I usually love poetry and verse, however, this book just didn’t hit the mark for me. I think my biggest issue with it, despite the fact that it was written as poetic verse, was that the writing just wasn’t that poetic. I was expecting more lyrical writing with this type of writing format. Sadly, this wasn’t the case. Another issue that I had with this book is that it was told in alternating perspectives, and I usually love the dual points of views, however, the way it was written, there was no clear definition between who was Clare or who was Zari. So it made it a little confusing to keep up with the plot because of that.

It saddens me that the execution of the story wasn’t done well because the book explored some very important topics like friendship, self-discovery, and abusive relationships. And I think those are some compelling topics for teens to read about if done well. The characters in this book weren’t very well-developed and this book just fell short.

As a writer, I honestly despise being too critical when it comes to debut authors so I won’t delve too much on the negatives. Also, since I’m not the intended audience, the writing may not resonate with me so much, however, middle-grade readers or tweens may find this books interesting.

*Thank you so much to NetGalley and West 44 Books for the digital ARC of this novel in exchange for an honest review!